Zizaran and the community will be partnering up with Shopify Rebellion to bring the next iteration of The Gauntlet starting June 12th (3:00 PM GMT+1)! This time with some new goodies supplied by GGG, and a much more focused outlook on the Class Gauntlet. Shopify Rebellion will be matching the community fundraised amount up to $25,000 and also supplying $7,500 in MTX prizes in drawings that anyone who participates can win.HERE.

There will also be many fundraiser events held by some of your favorite community streamers such as Alkaizerx, RaizQT, Nugiyen, Baker, DS_Lily, Zizaran, Badger, Terence_, Lightee7, Steelmage and more! Streamers and their communities will be able to create a bounty with the money they fundraise for the event. Bounties are custom rewards that the community will create together to reward players. Pay attention to your favorite streamers social media for more information on when their fundraiser will be! Watch the video below for more information! Full information including rules can be found HERE.

This time around we will also be doing LIVE CASTING on Zizaran's Twitch Channel! Havoc616 and BigSil will be teaming up to bring you daily Gauntlet Action! Check out the video below for more information!

Leveling your characters to certain levels based on level or class can put you in random MTX and physical prize draws supplied by Shopify Rebellion! For example, if you reach level 90 and are a Scion you are eligible to win any of the level rewards below and the class specific drawing. You can gain more than 1 ticket per account for the MTX / physical prizes below however, you cannot win more then ONE prize PER Category Below. GGG has also supplied 1000 Apollyon Mystery Boxes for random draw. 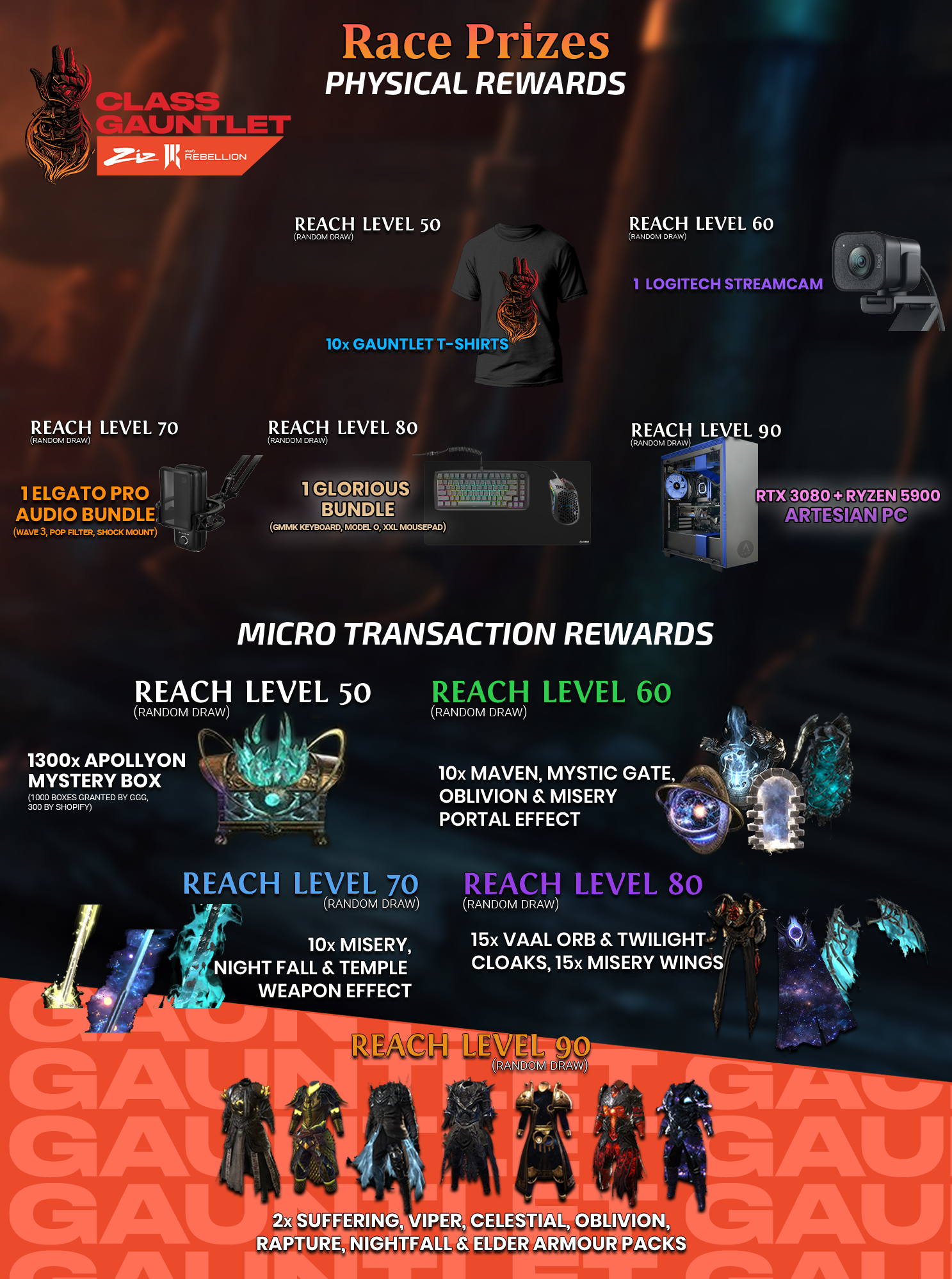 Shopify will be matching all donations to the prize pool. (Up to $25000)

This time, Grinding Gear Games has made Gauntlet an EVENT LEAGUE. That's right, for the first time ever Gauntlet will be an EVENT LEAGUE in game. No more maximum slots and no more worrying about if you’ll get in! So show GGG how much you love the event and make sure to participate. Just Log in, click Join in the bottom right of the character select screen and get grinding at the start of the event!